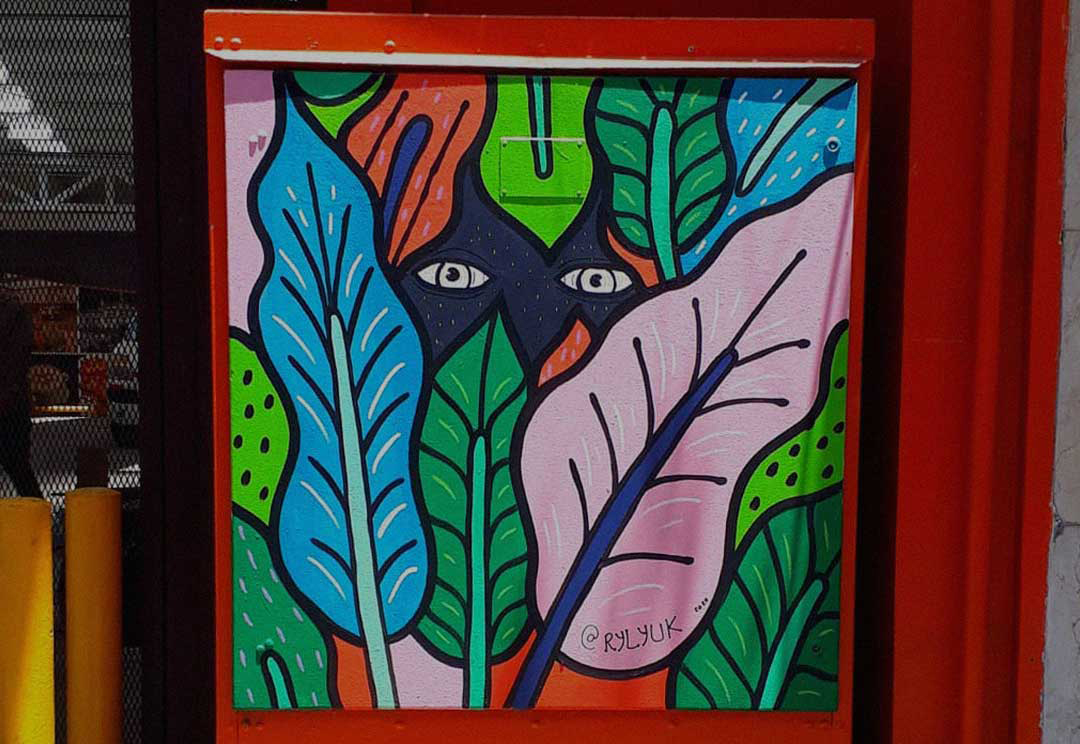 Nature springs from the concrete of Tibás. Discover Rylyuk’s murals.

Helicons, hummingbirds, bees, and owls appear from the cement in the streets of the of Tibás through the art of Rylyuk. Electric lamp posts, telephone connection boxes, or tunnel walls are often a kind of “caste” despised in a city. They embody the souls of public baths, or a free space for stick posters with the offers of the day. Consequently, they become smelly objects and places full of torn paper that accumulates layer after layer. In this context, street artists become a tribe of “exorcists” who manage to bring these objects back to life, but better than that, to a better life. One of those “exorcists” is Riliuk. Pura Inspiration spoke with this illustrious artist from Tibás and collected a small fraction of his colorful work to share with you. 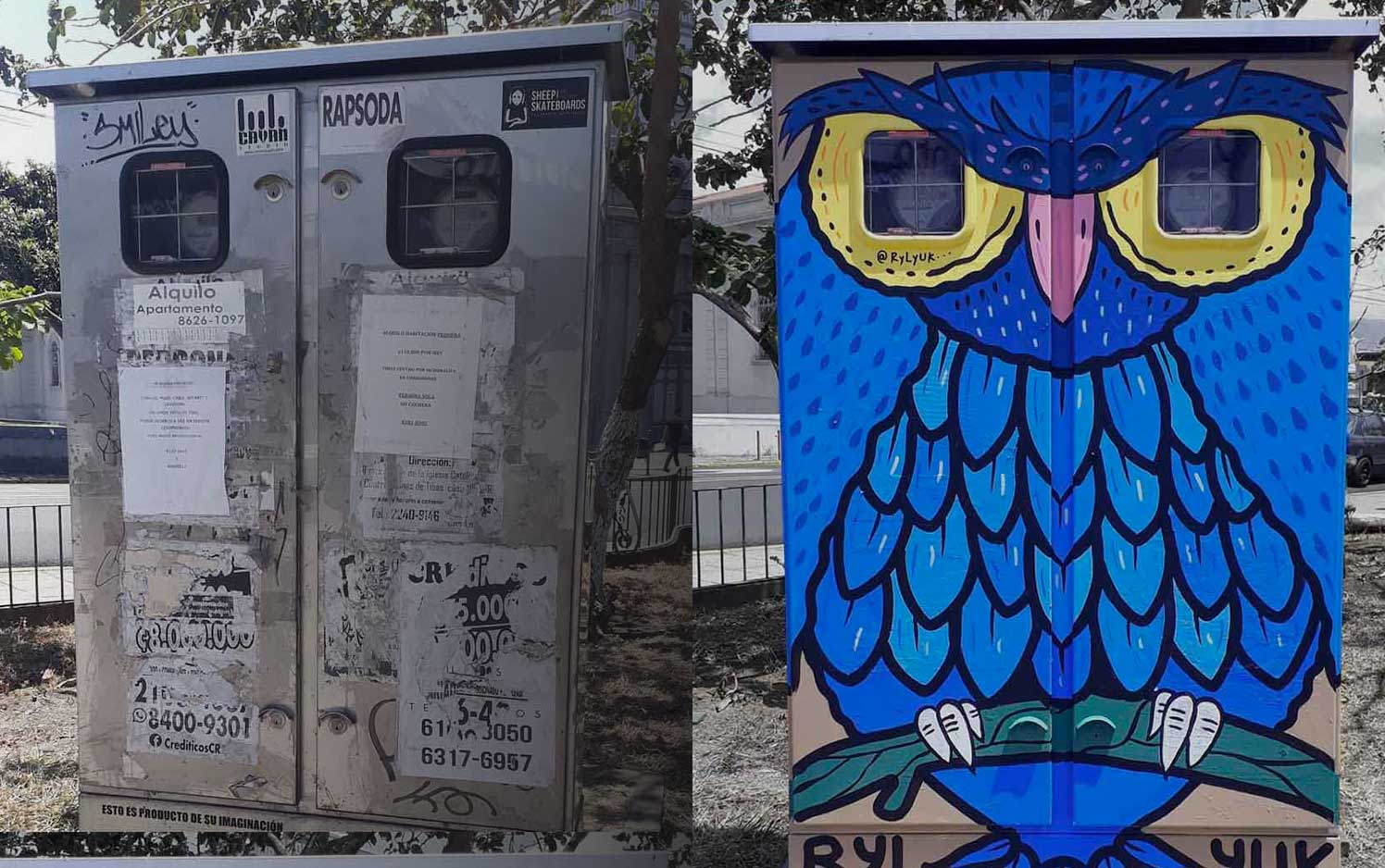 The “before and after” of a telephone connection box. Before it was just an ugly owl.

PI: You are very productive. Just take a tour of Tibás to see how many painted murals you have. For example, how many light poles have you painted?

I think more than five hundred. I started painting the lamp posts in Tibás as a form of self-expression. I soon realized that, like many, I hated how dirty and neglected they were. So I thought, that in addition to being a form of expression, it would be useful to solve a problem. For me, it is all that painting on the street entails; it is part of a process.

Get to where they are, clean them, sand them, and then paint them. Painting posts in Tibás became a boom, and people started helping me, giving me the materials I needed. I understand that other communities also liked the idea. I know that in Turrialba and Palmares, they are also doing it. 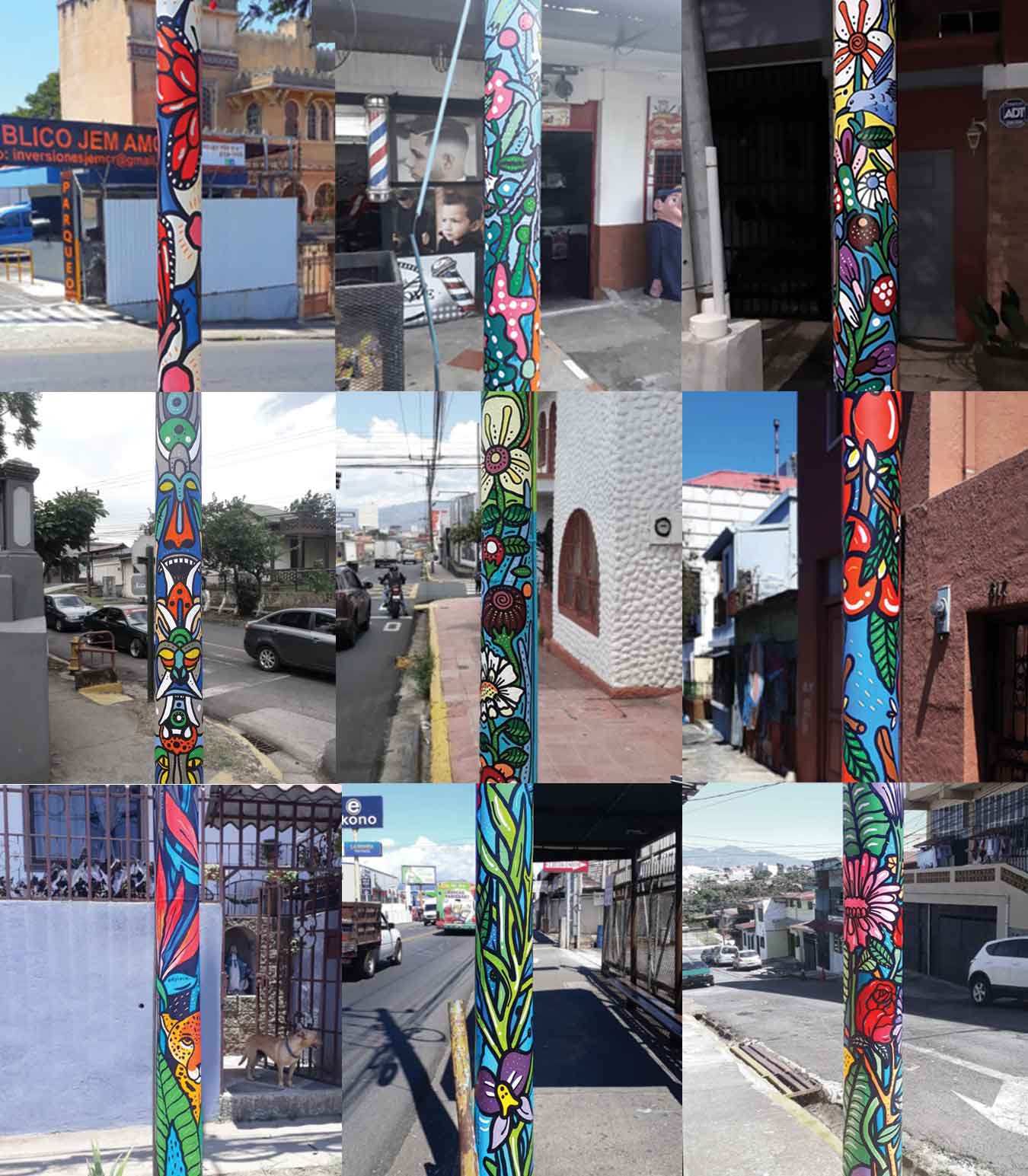 Although we know that most of the time, the poles and the telephone frames are very neglected. Do you have any problems painting them?

“Possibly, if they were to make trouble, the main defenders would be the neighbors themselves, who have cooperated so that I paint them.” 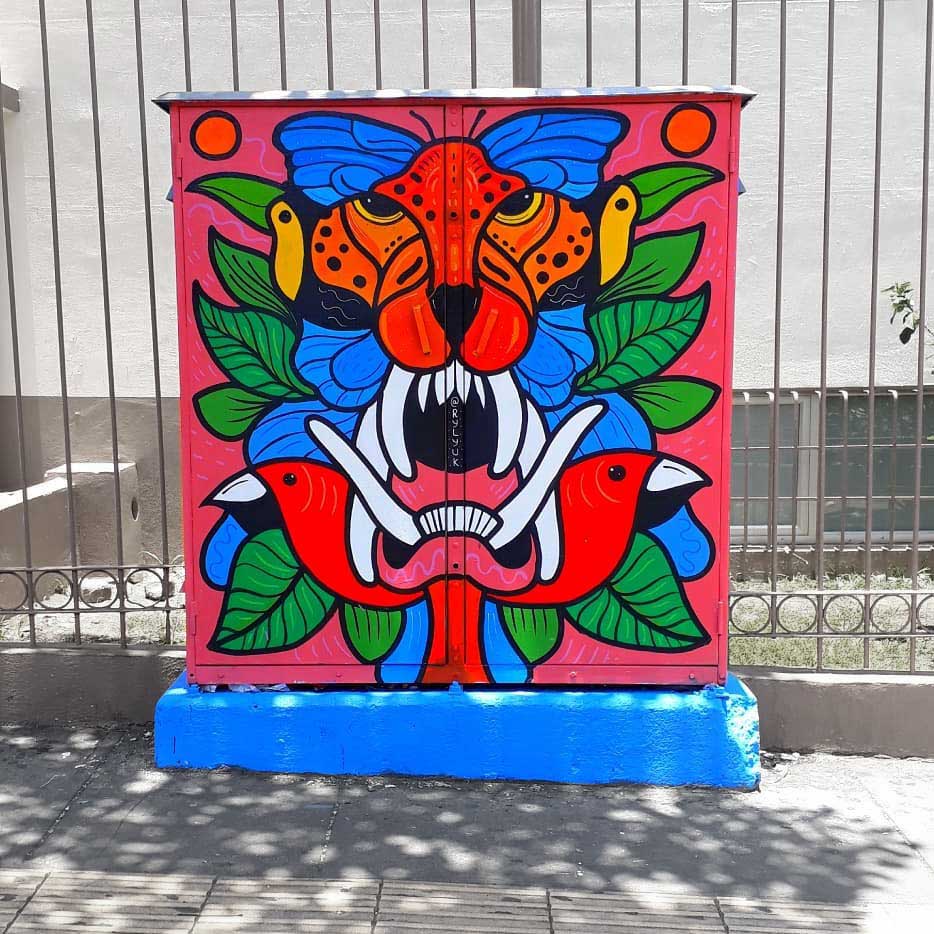 Another junction box that went to a better life from Rylyuk. 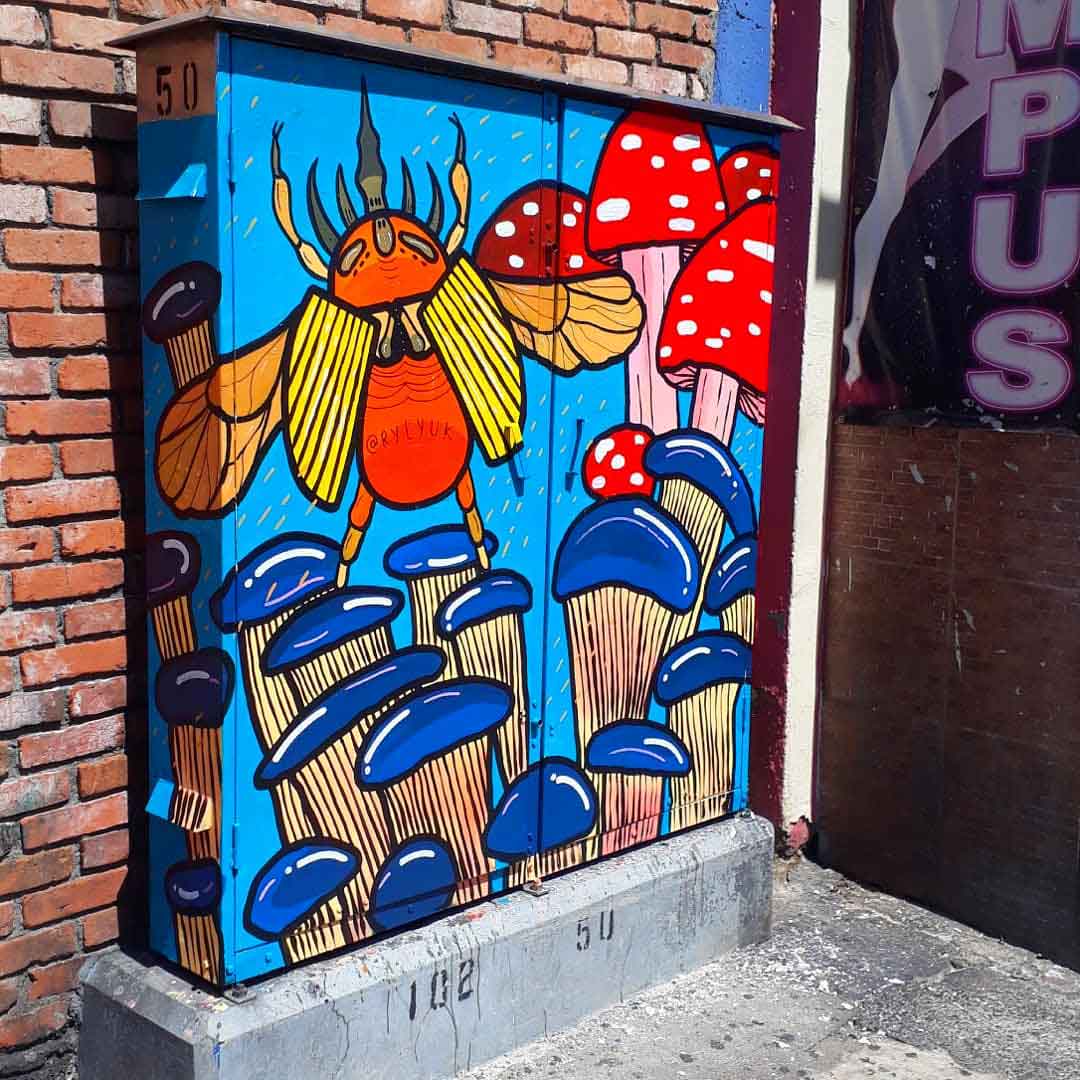 A multi-colored beetle takes off from “The Mushroom Valley.” 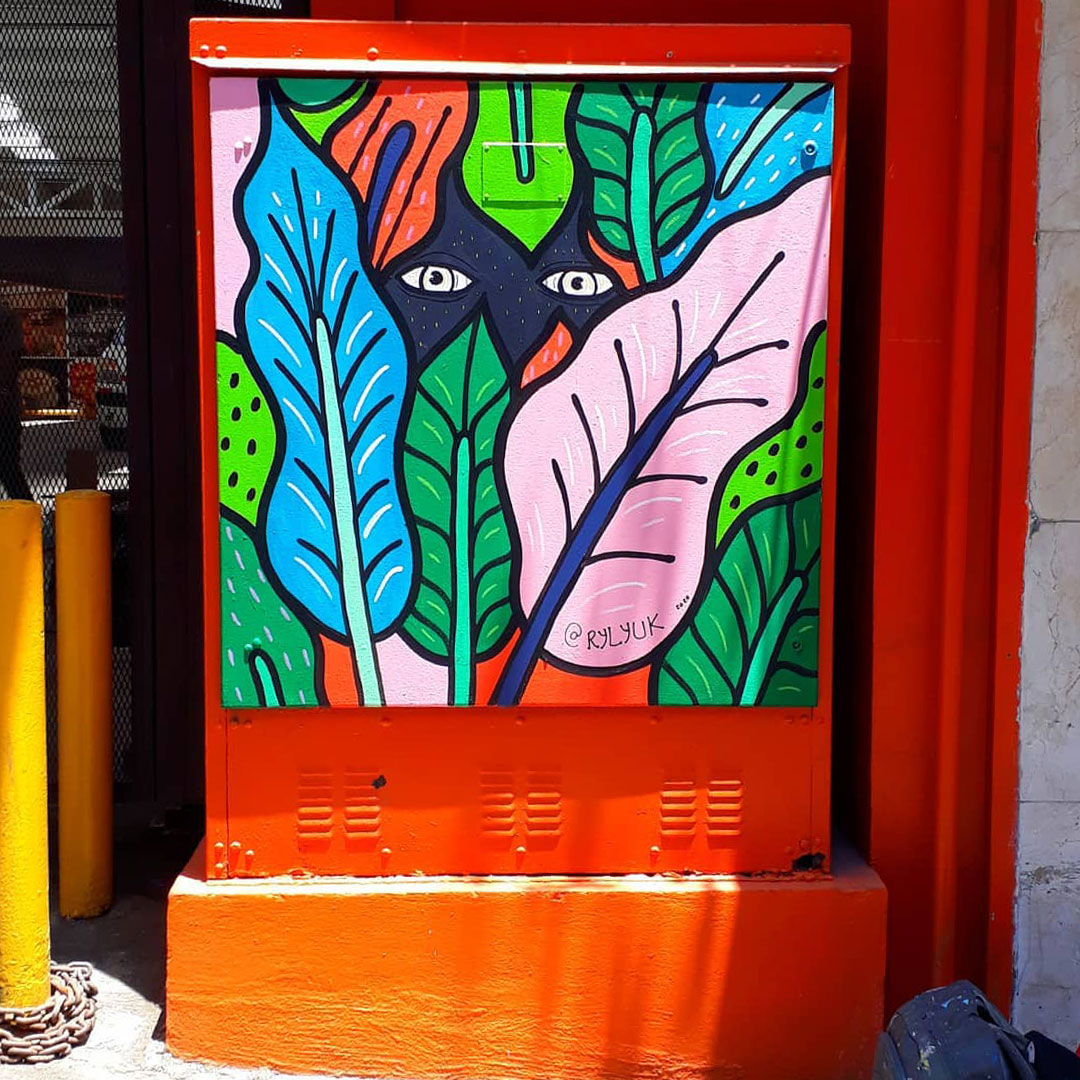 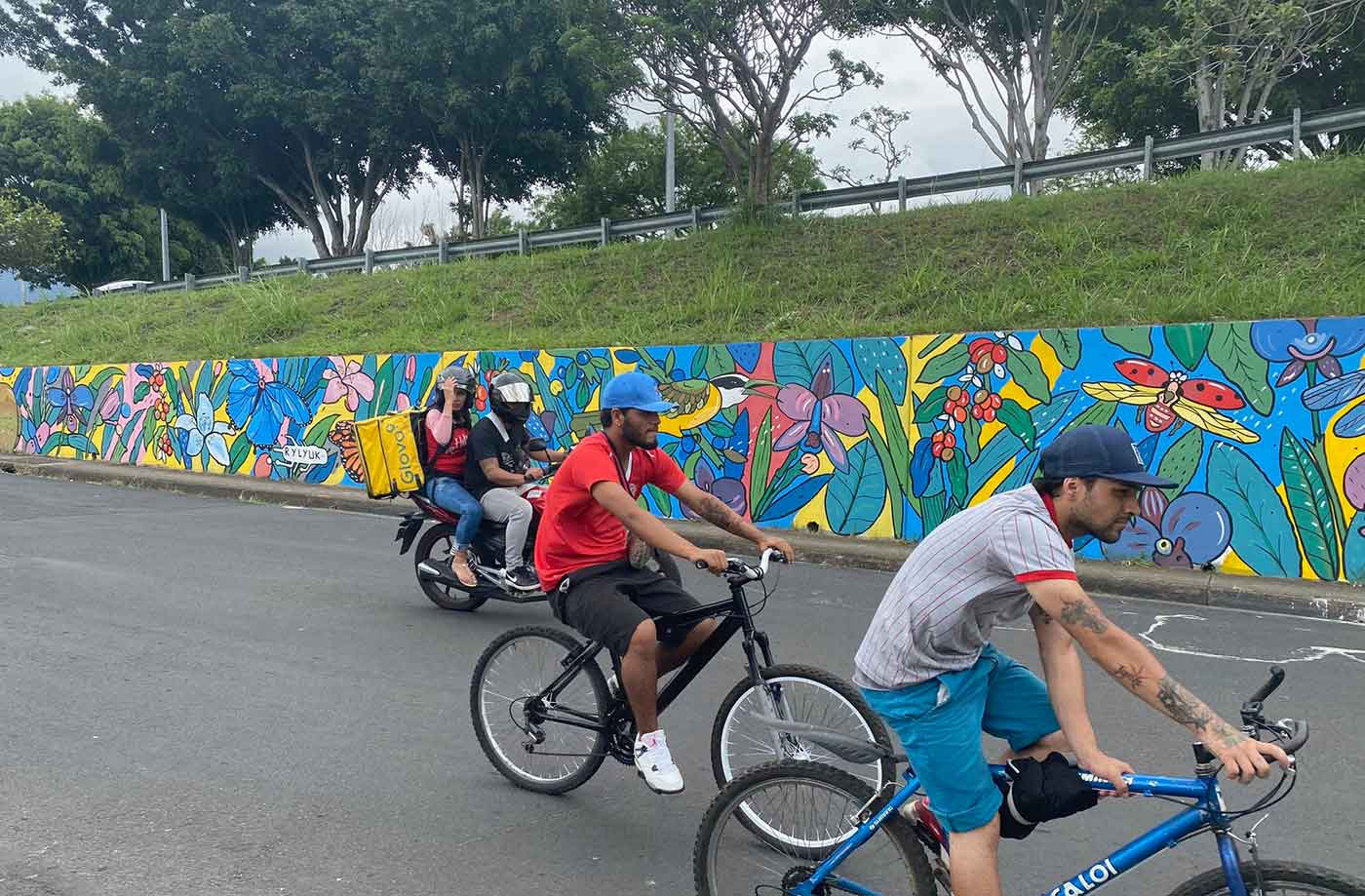 Rylyuk aims to impact the city with a large volume of works.

PI: Has your art become your livelihood today? Can you make a living from your murals?

Even when I don’t have a commission or contract, I still go out to paint. It is to keep me active. Also, the jobs they ask me for, generally the contact happens while I’m painting on the street. I need to stay active. I need people to see me.

PI: It caught our attention that one of your last works, you painted some bats, a species that is rarely the protagonist of a mural? Why did you do it?

Like many of my works, I do it mainly, to rescue a forgotten space. But the reason for the bats is that Tibás is known as the Cantón San Juan del Murciélago, and that bridge is the entrance and exit to the Cantón. It was an important bridge that was sad, and I wanted to rescue it with art.

PI: Because of your participation in Canton’s social networks, do you have a lot of relationships with the community?

I often post the idea and then ask people to help. What people what they can give. Leftovers of paint, for example, well gallons, as a company does. It is nice because when people see the finished work, they feel that they are part of the project. It is important. It unites people; it gives them a sense of identity. 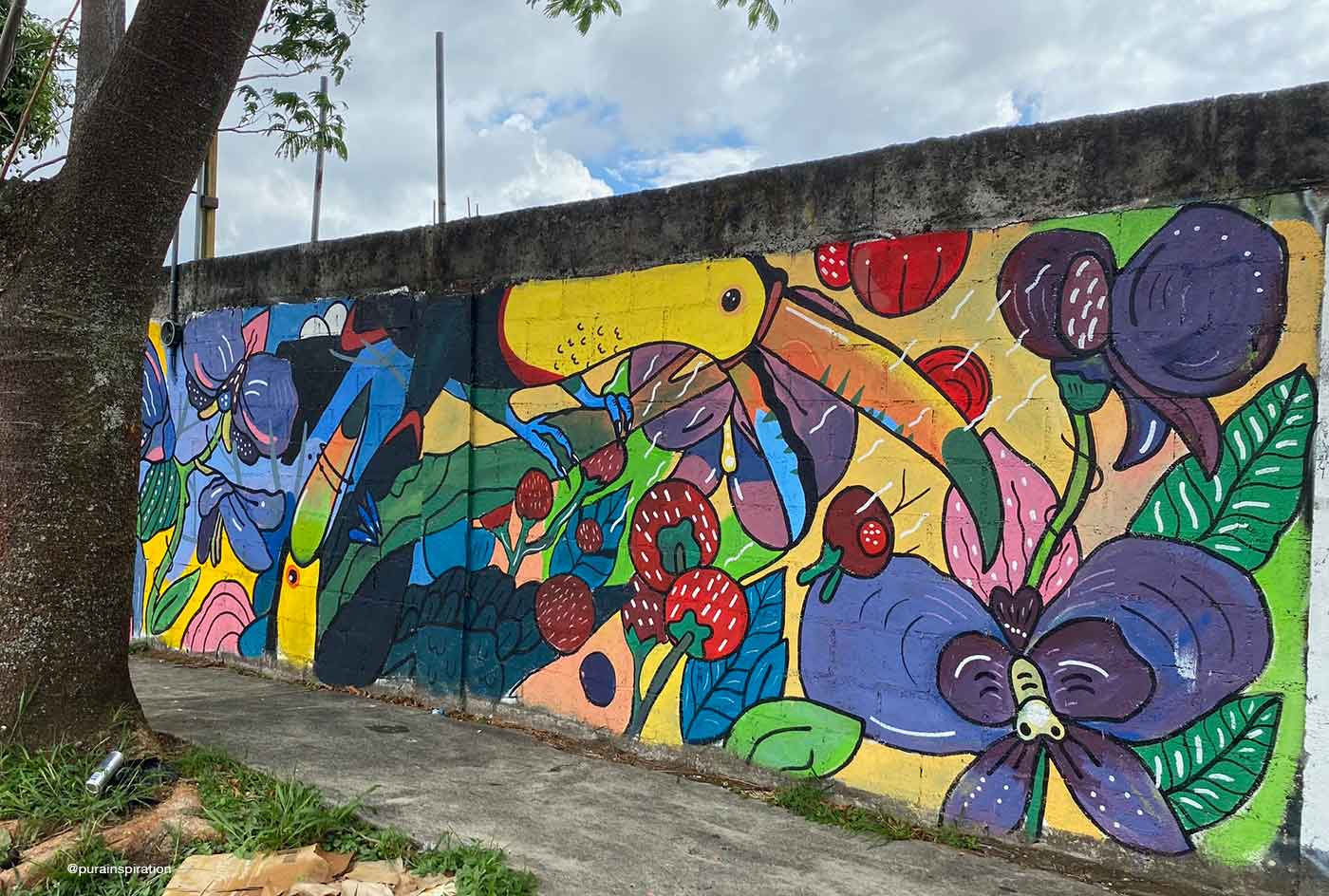 Toucans, orchids, and fruits. Where before there was only cement, now there is only life. 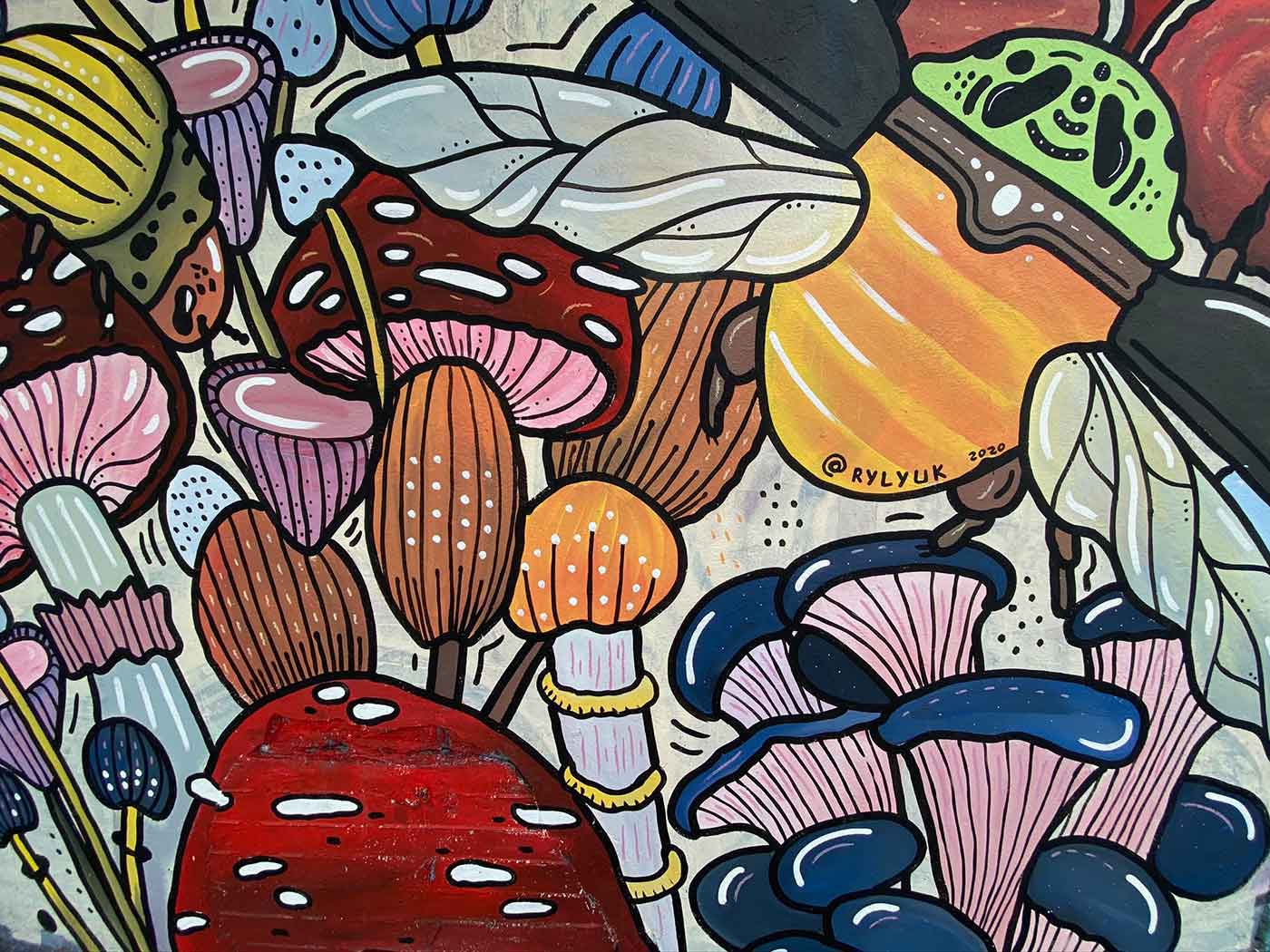 More mushrooms, and another happy beetle.

PI: Do you think your art has any effect on people?

Bring happiness, more color. It is sad to go to San José, because of the smells, and how everything is neglected. Many people do not want to go. It seems to me that all of a sudden, seeing all that bunch of color is a sharp contrast, and it draws attention. Another motivation is the reaction of both older adults and children who are happy andlike it. I think my art reaches all ages. They see it as something positive, and they love it.

PI: What is your inspiration, what awakens your desire to paint?

“Art itself inspires me by reaching people. That I am doing something positive for my country, something for my neighborhood.” 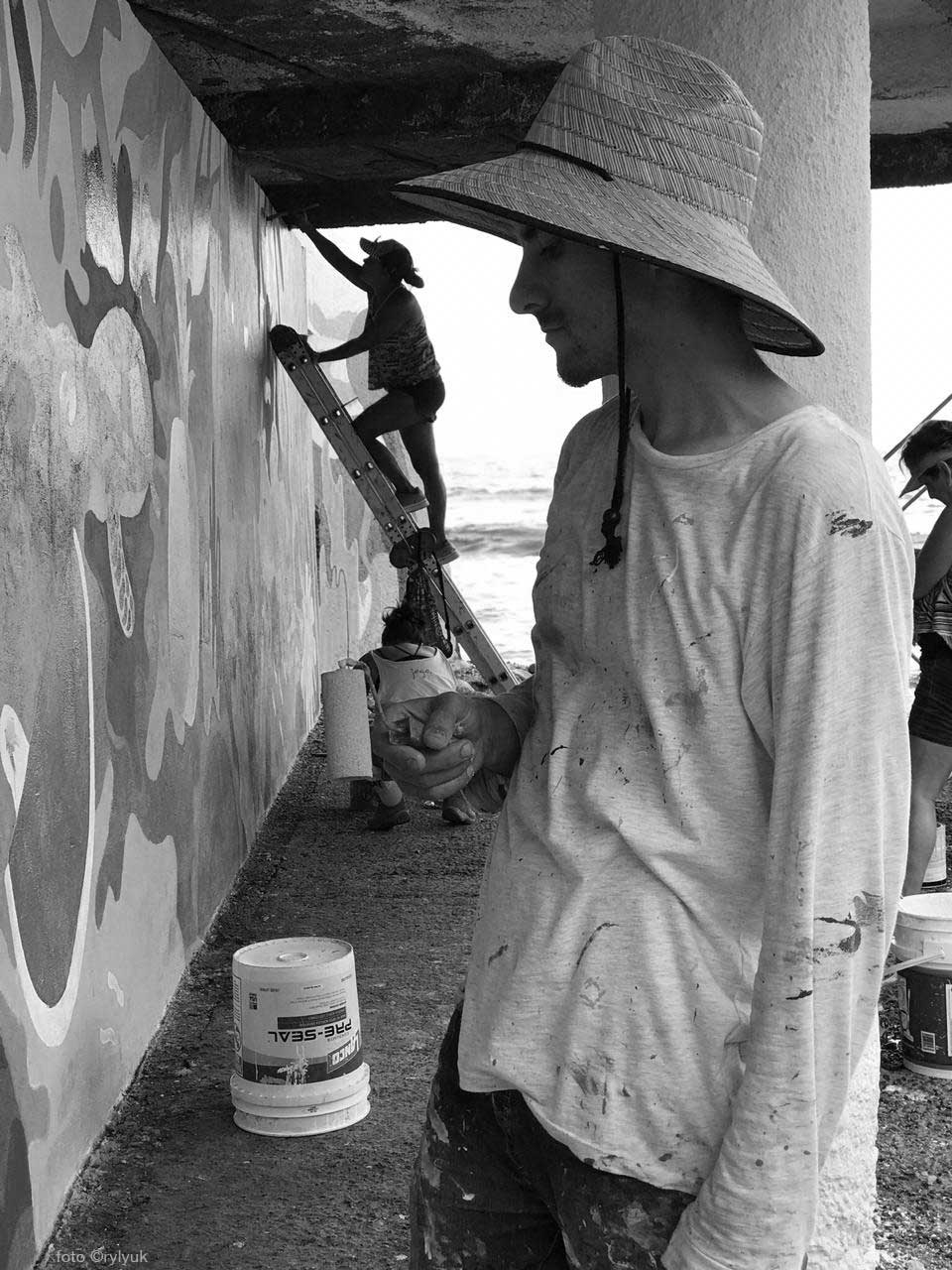 If you want to know more about the murals of Rylyuk, we recommend a tour of Tibás. Its animals, leaves, and flowers are everywhere. 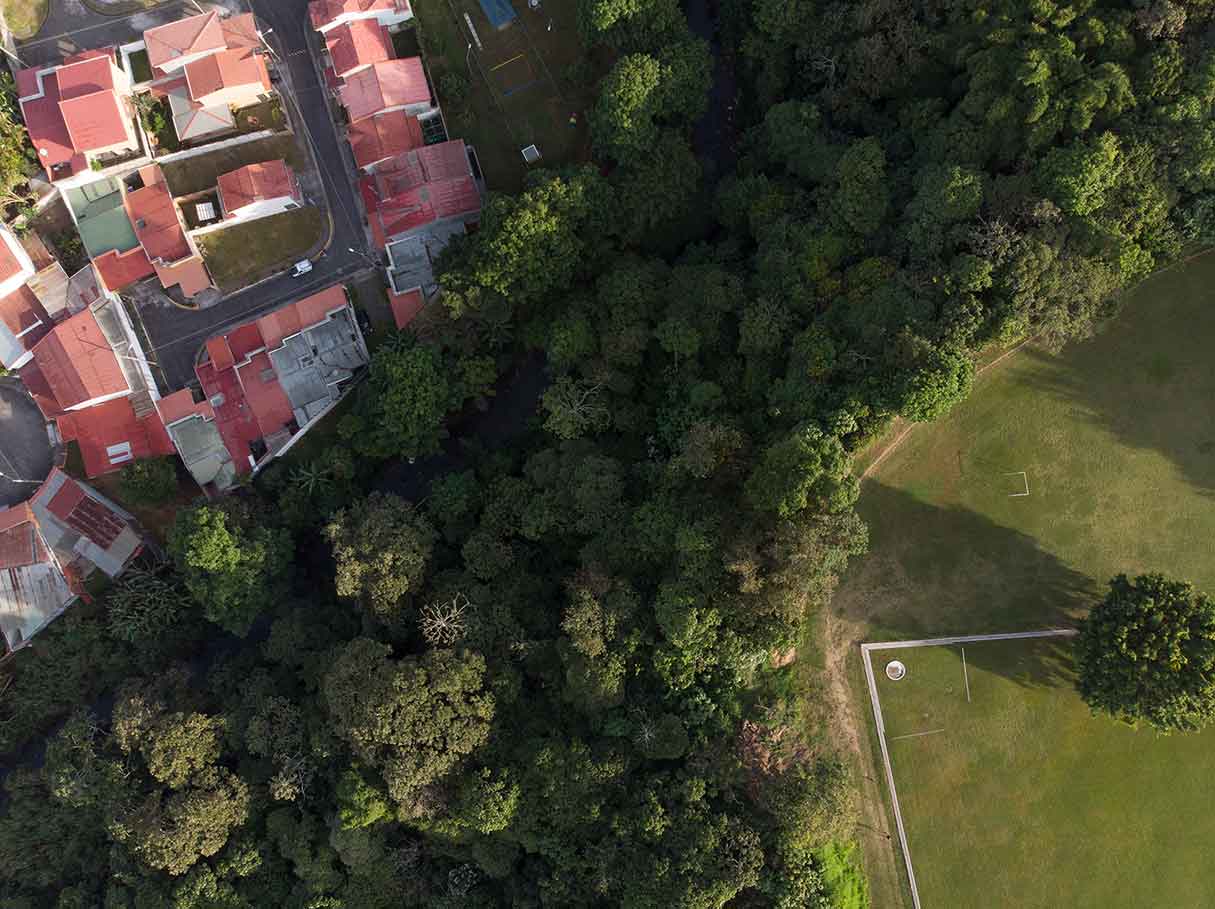 They look like right out from Star Wars👽, but it’s extreme macro-photography of insects.